I met up with a gentlemen at Prickets fort and he gave me three axes and three knives in which he wanted sheath made for them. 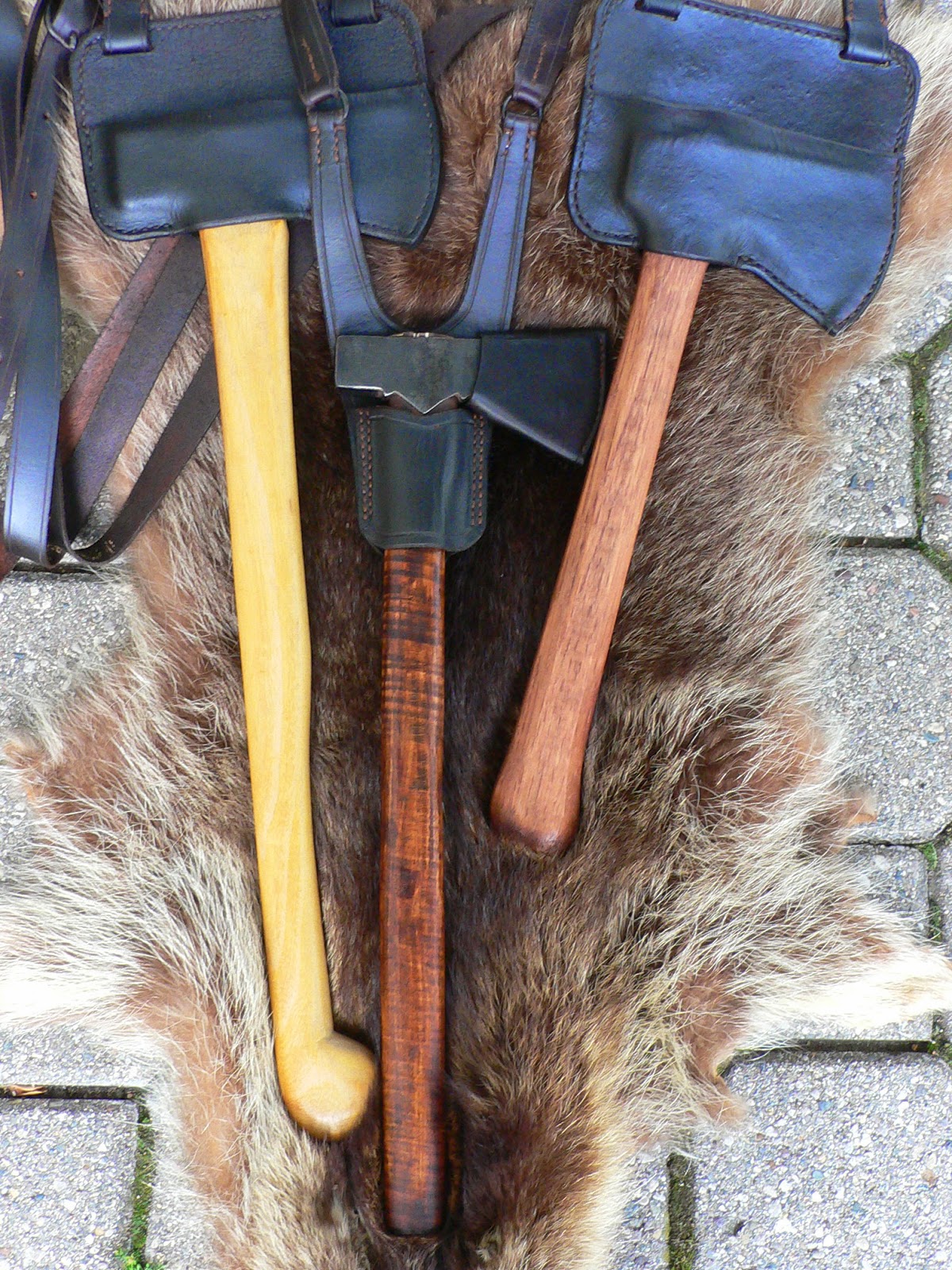 So for the axes, I made up the two to be carried on the right side under the shot bag. The third a small tomahawk I made up a separate blade cover so that the ax can be carried tucked in ones belt or sash, or carried over on shoulder, either right or left side. All three have a Iron buckles to make the straps  adjustable. 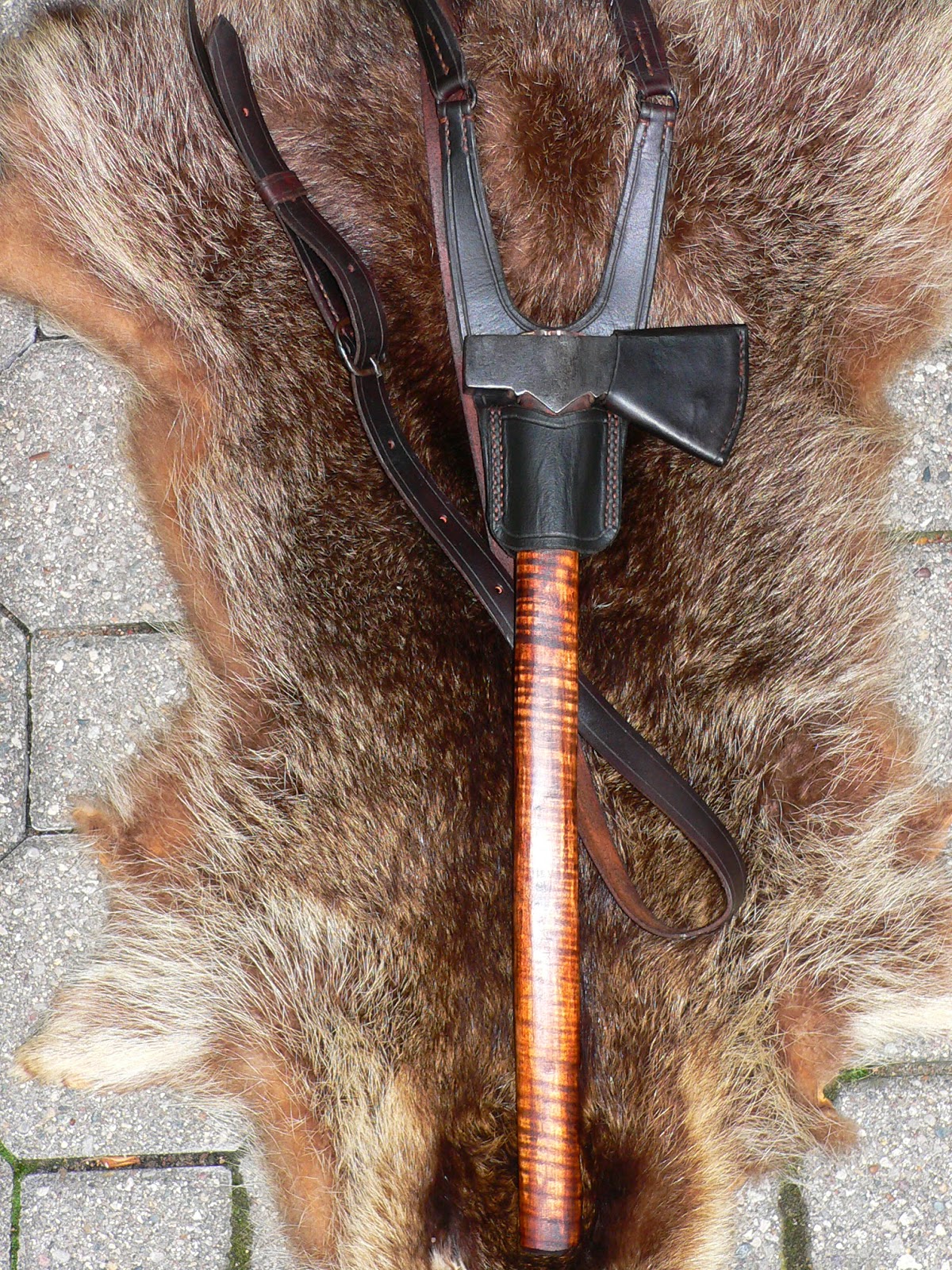 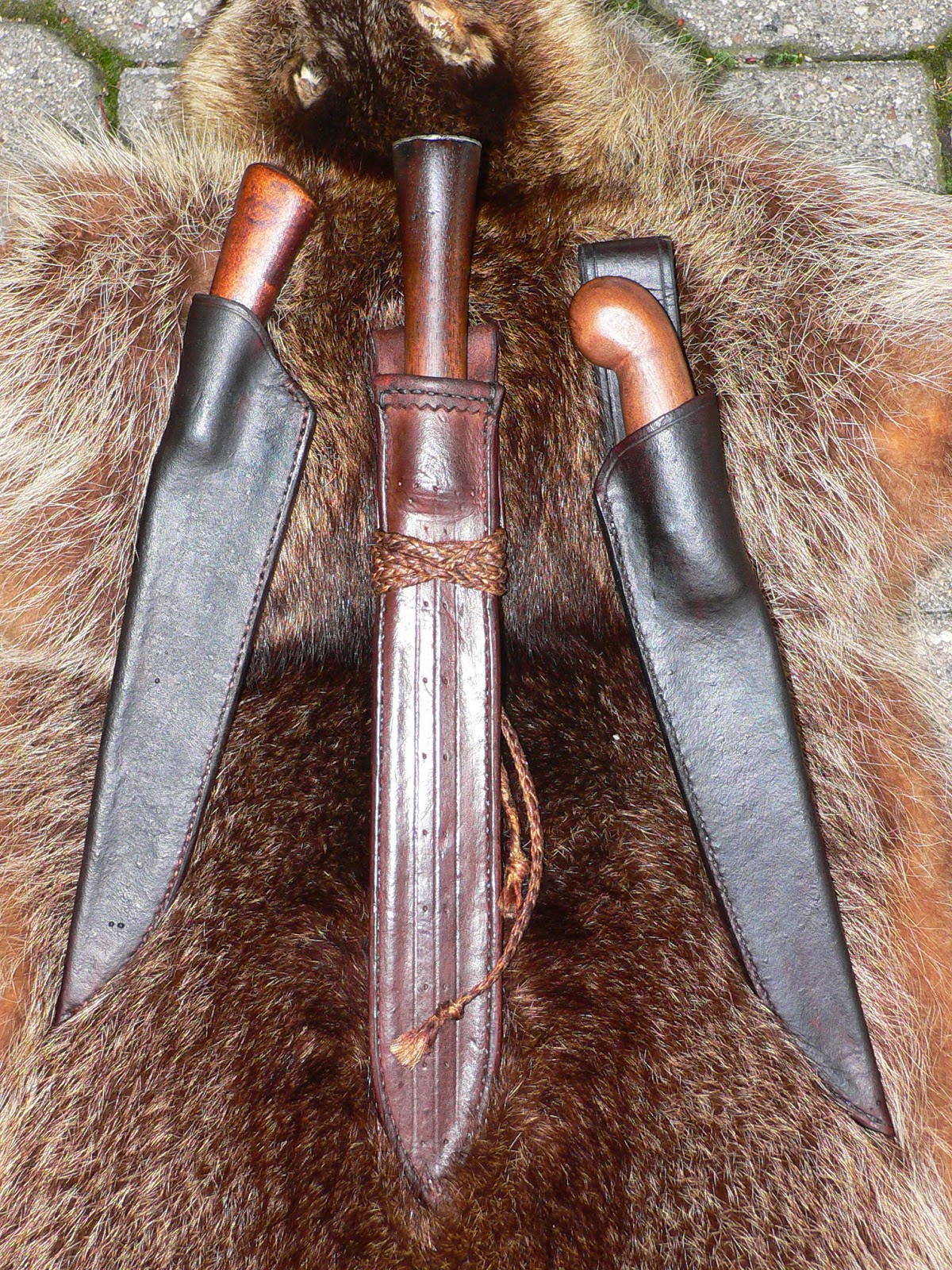 As for the knives, I tried to make up simple sheaths that fit the style of knife. 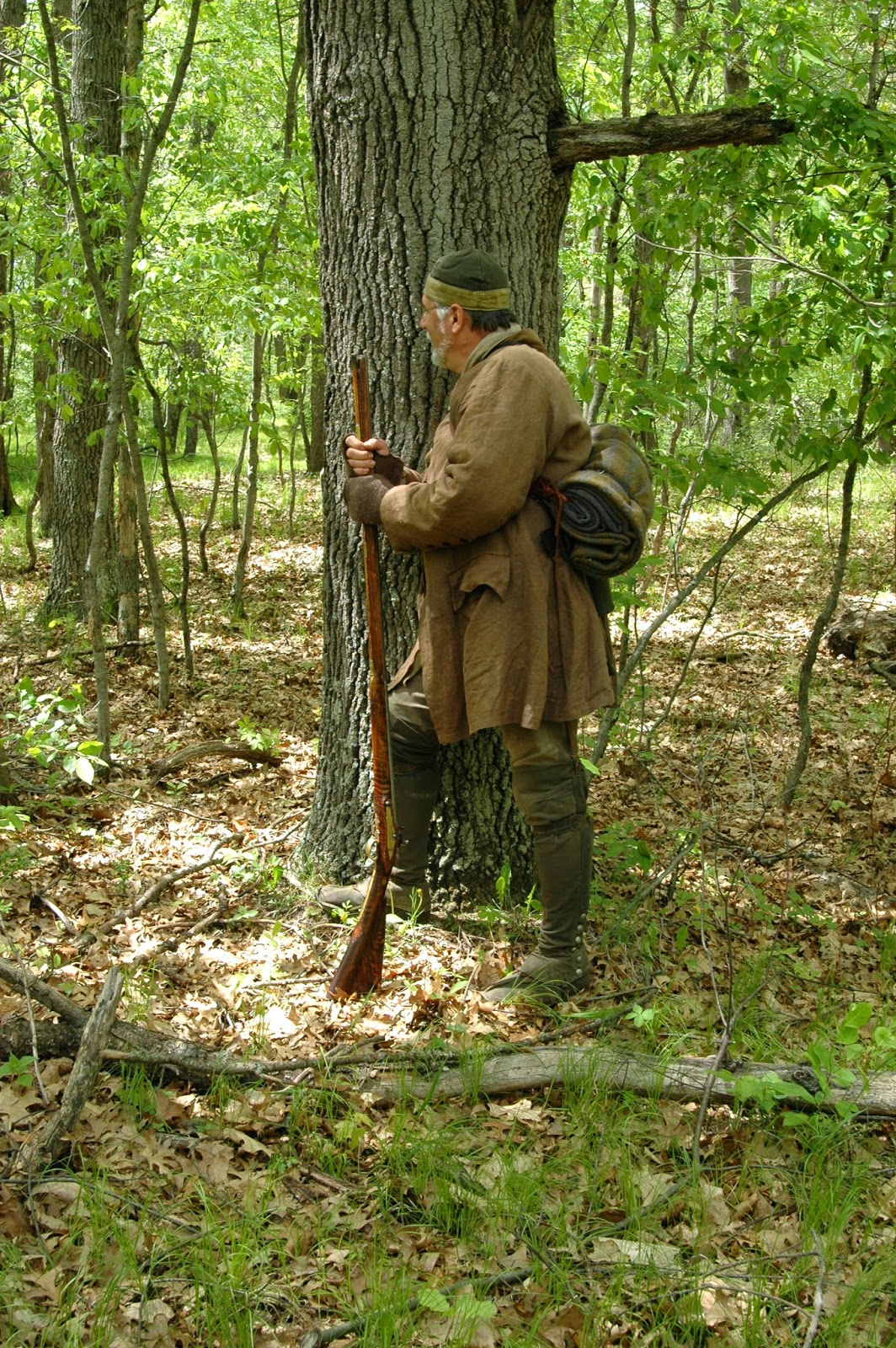 The spring turkey season in Michigan is by permits only and opens in mid April and ends the last day of May. My permit was for May 5th until the end of the month, I could hunt state or private land in the upper half of the state and only private in the lower half of the state.
I was able to hunt a friends place down in the lower part of the state. The first time I got out was a beautiful Thursday morning. I didn't make it out in to the woods until after the sun was up but, there was still some Toms gobbling off in the distance. I chose to hunt the edge of the woods along a newly planted corn field and my friend took to the woods. I sat just in side of the woods and made calls about every half hour or so. A few yelps just to let them know a lonely hen was around. I sat in that spot until eleven or so and only saw one bird. It was a single hen walking the field’s edge and she walked less than ten yards from me then turned and walked in to the woods again so close as if she was saying here I am. Now the funny thing about this hen is she had about a six inch beard and in Michigan she is a legal kill. I'm not sure if they can lay eggs and hatch young but I chose not to shoot her because she may have a nest.
I met up later with my friend and we headed in for some lunch and talked about the morning hunt.
He wasn’t able to go back out to hunt but, it was OK for me to return to the woods. He gave me some spots to try where he had seen some toms in the evening but, as luck would have it they didn't show. I sat until around eight and finally had to leave, just couldn't take the buzzing and biting of the mosquitoes any longer. 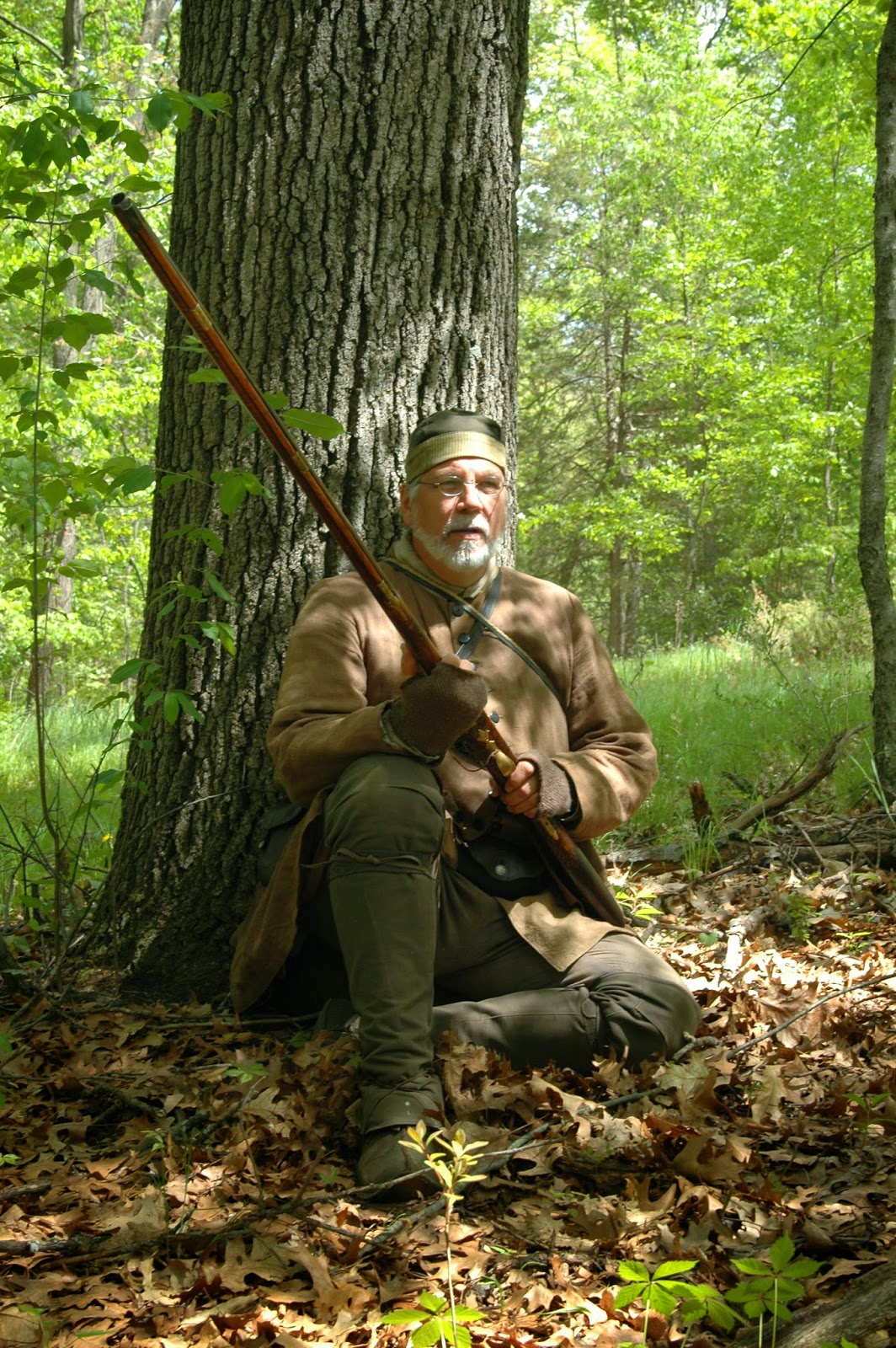 Day two was to be a week later, again another great day to just be out and in the woods. I would again hunt the edge of the same corn field but, this time the opposite side in the tall grass against a large oak, there was a break in the fence row and the birds would pass through into the next field to spend the morning feeding but, not this morning. The first thing after getting settled in was I had two bucks with their newly formed antlers sprouting out from their heads trying to make their way out into that same field. We played peak-a-boo for a while then they turned and went back the way they came.
The sun was bright and shinning right in my face. I would look out and scan the field then drop my head down and stare at the ground and after a few minutes repeat the same thing and once in a while I would make a call or two. After some time I looked up and about fifty yards out there was a hen standing there checking things out. I'm not sure if she was looking for the bird that wasn't there or she saw the sun glare off of my face or glasses but, she chose to go in a different direction. I saw two more heads coming across the field too but, they chose to follow her. I saw one other hen feeding across the field that morning but she never looking my way.
So again we met up and went in for some lunch, and again talking about the hunt and how smart the bird have gotten over the years and yes I even took a nap. A round four we made our plans and again headed to the woods. As I was headed out I spotted two birds standing on the shaded side of the old section oak out in the middle of the corn field. After checking my map I came up with a plan of attack, I would work my way around the far end of the field to the woods then cut through the woods to the edge of the field across from the oak. Everything worked as planed I could see the top of the oak over the rise in the field. So picking a spot just inside of the woods in the tall grass I sat down and started to call but the only thing coming to the call was the darn mosquitoes and they were bad, every once in a while you would get a breeze and it would blow them away but, they would return. 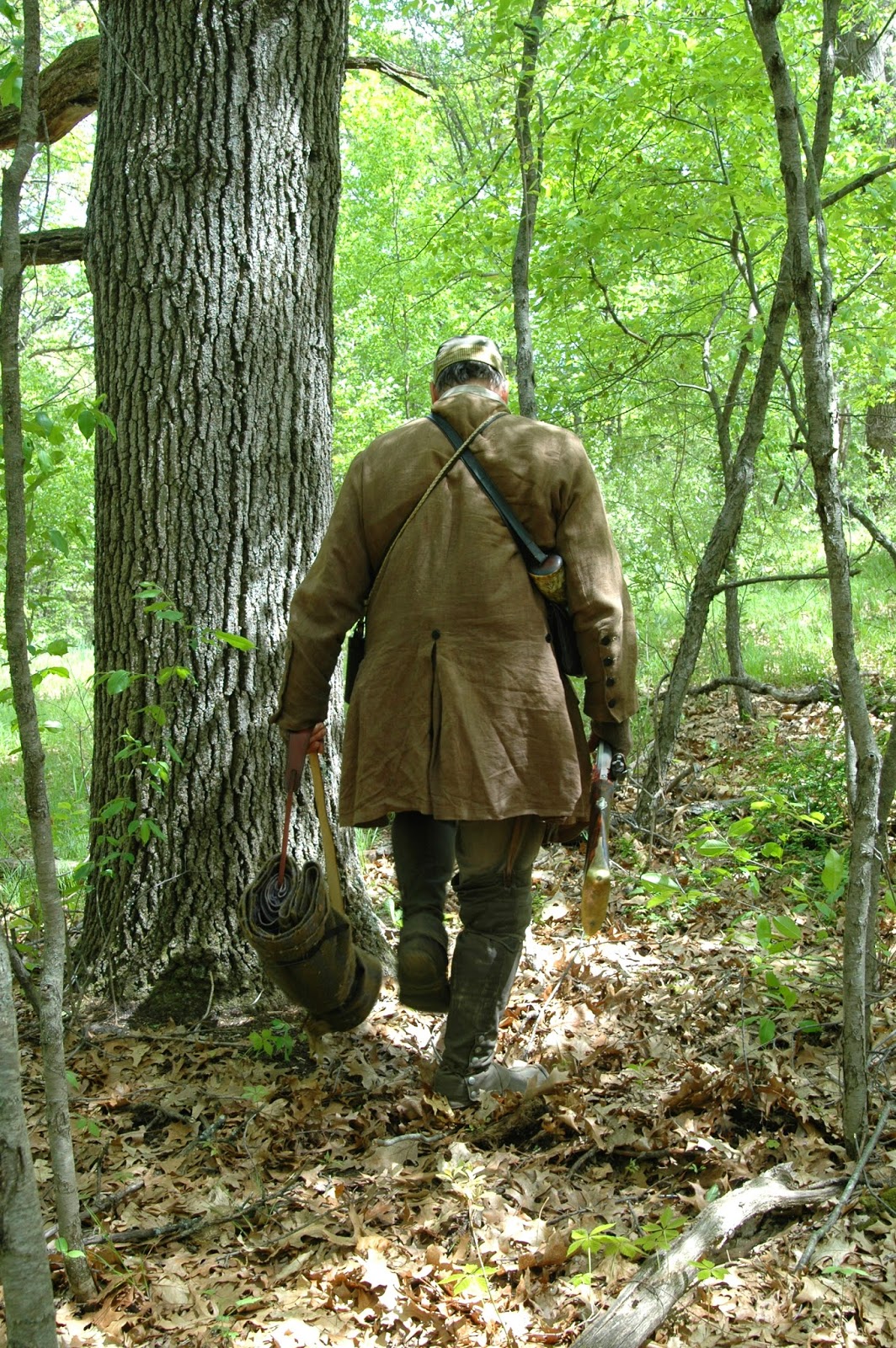 I sat as long as I could but I need to get out, away from the bugs. As things would go there to my right was a hen, she showed no signs of alarm, and she just turn and went back out the way she came. Now mad at myself for not sitting longer I turned to see the red head of a tom coming around the other side of the rise, I quickly dropped to my knees in the tall grass, and he hadn't seen me. Now this is where the story get's interesting remember the hen with a beard that I didn't shoot, well here stood a tom bright red head and no beard, I mean no beard, zip, zero, a big fat nothing! Now in the state of Michigan the law reads the bird must have a beard, hen or tom you can kill it, no beard it walks, end of story! Also the end of my season, again out smarted and empty handed, but as they say that's why they call it hunting.
I was grateful to my friend to allow me to come out to hunt with him again and it was a great day to be in the woods!
Until the next time!