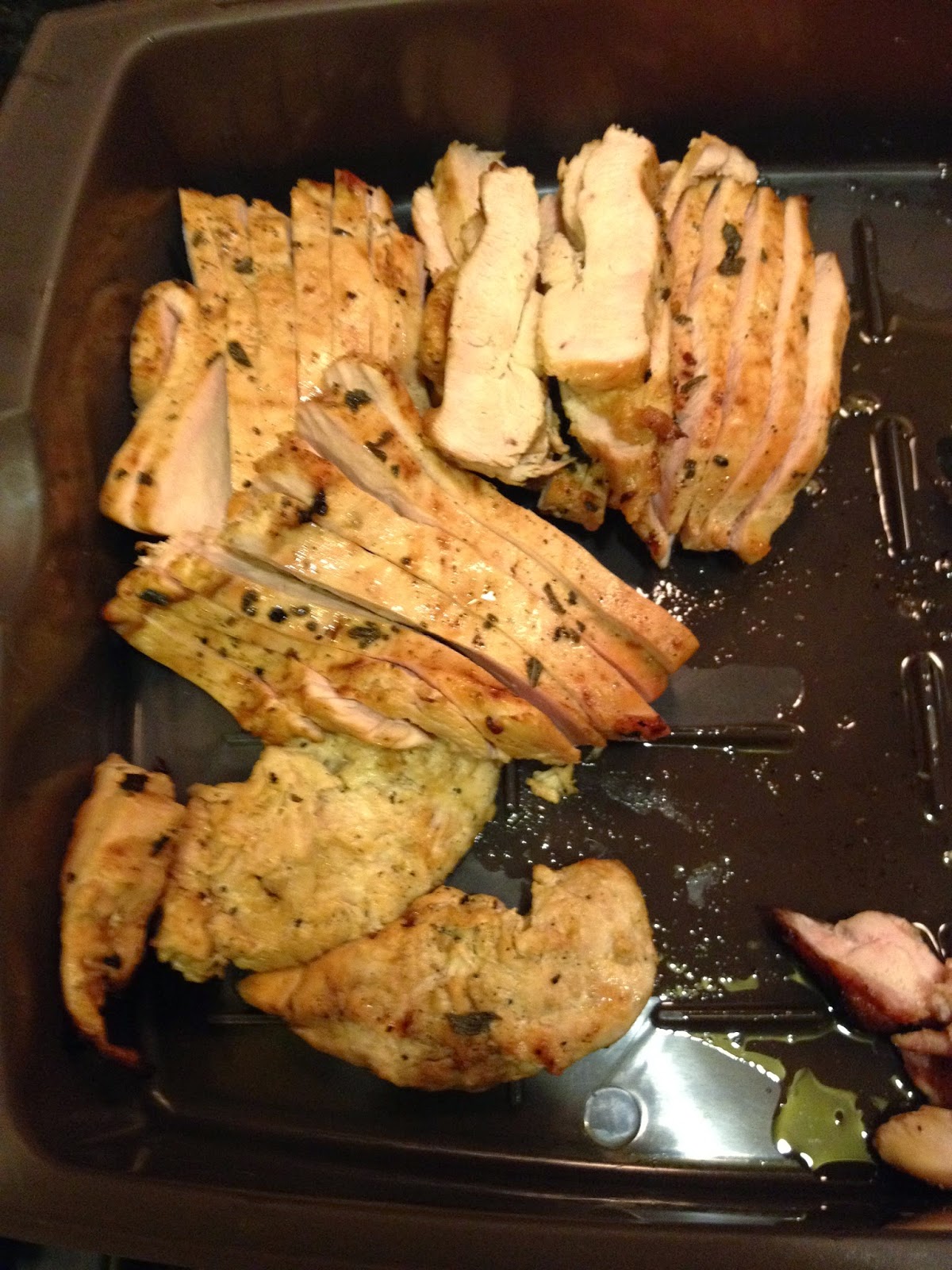 My daughter in law, Leeanne, who is a great cook and a chef, fixed the wild turkey breast  for my birthday dinner. She did a great job and the food was outstanding! 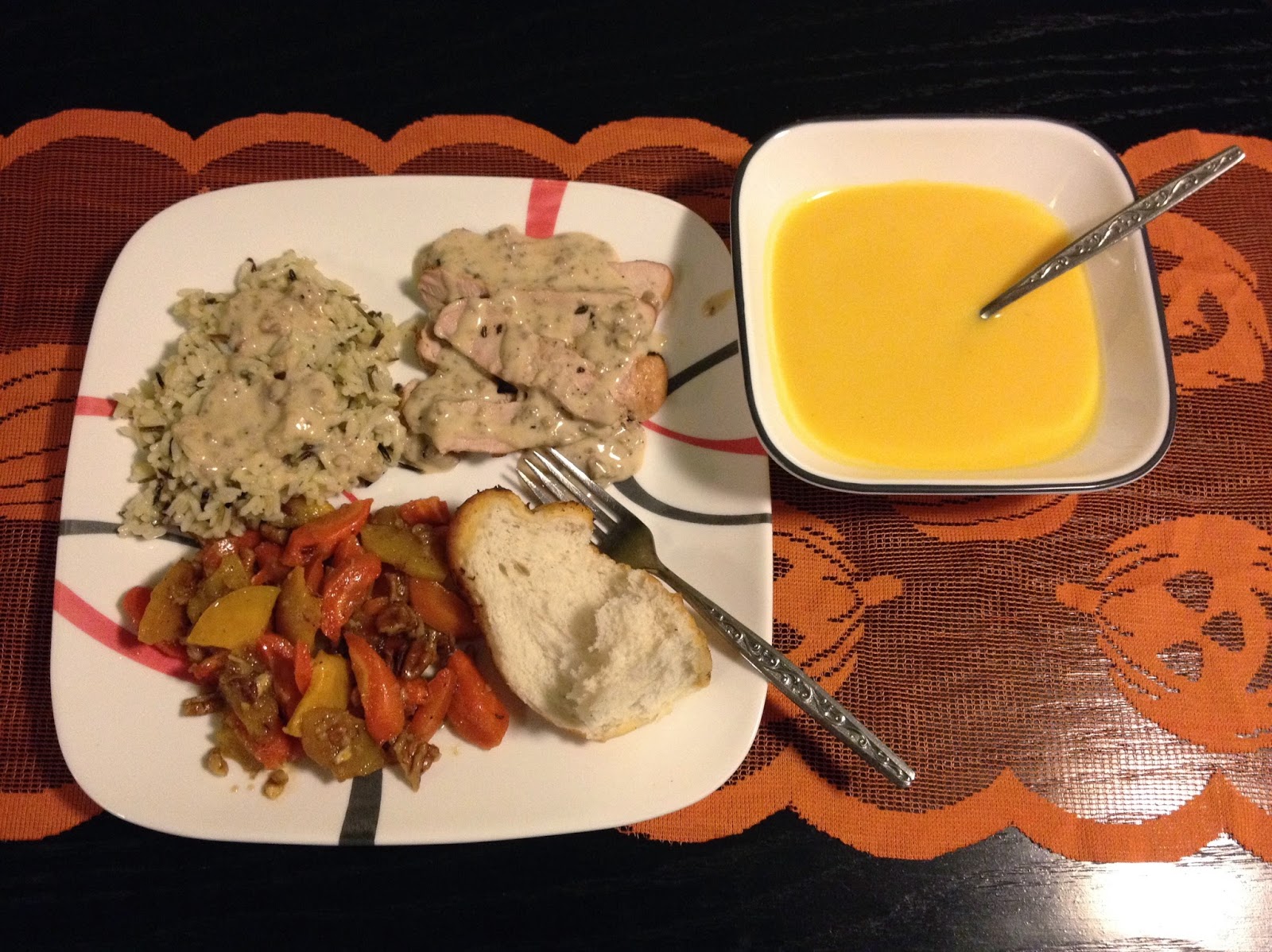 The menu was:
Wild turkey breast done on the grill, wild rice, carrots & squash and a sausage gravy,
homemade butternut squash soup made by my wife and bread.
What a fall feast!
Posted by Darrel No comments: 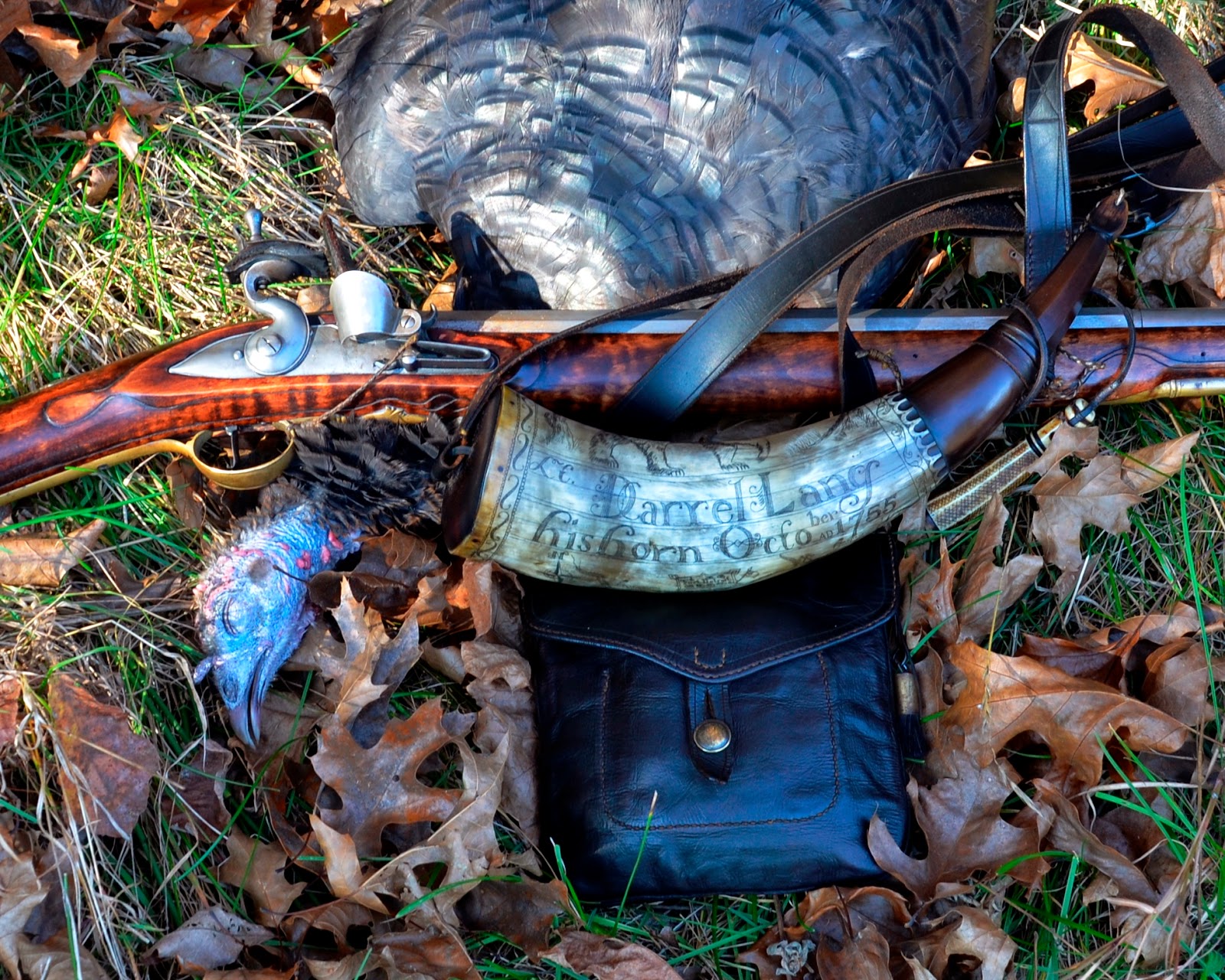 This past Thursday Oct.23, I had the opportunity to head to the woods and try my luck at hunting some fall turkey and squirrel.  The weather for the day was to be blue sky and lots of sunshine, in the high fifties, a great day to be in the woods.
I meet up with my friend who chose to hunt the hard woods so he drove further in and I parked at the gate, I was to hunt the ridge. I parked and quickly got my kit together and picked up my fowler and headed in. After crossing what is called the sand bridge I stopped and took in the woods in its full fall color and thanked god for the day and then primed my flintlock. We were to try for turkeys until lunch time then squirrel in the late afternoon. I wanted to hunt the two- track that follows the ridge because at different times that I have been out there I have run in to the birds also walking it. As I walked slowly along scanning the trail ahead I didn’t go far when a big fox squirrel run up a tree and began to chew me out for disrupting his day. A little further down the trail I came across some deer laying about 30 yards in off of the trail. I think they would have let me walk pass if I hadn’t stopped to check them out. I found a good spot in which I could watch the trail in both directions far enough to ready for a shot if a group of birds were to happen a long. So I sat and enjoyed the sights and sounds of the woods until I needed to stand and stretch out my legs, checking the time it was almost one o’clock so I decided it was time to move on. I continue to move slowly down the trail hoping to see a flock moving ahead of me but, all I kept seeing were squirrels they were everywhere. I even had one sitting on a branch with a large nut in his mouth not more than 15 feet away. I moved closer, talking to him, saying he was lucky I wasn’t hunting him at the moment but he better move on because I would be back and he wouldn’t be so lucky. He never moved as he watched me walk by, my wife asked if he ever said anything back to me, and I replied no! How could he, he had a nut in his mouth. 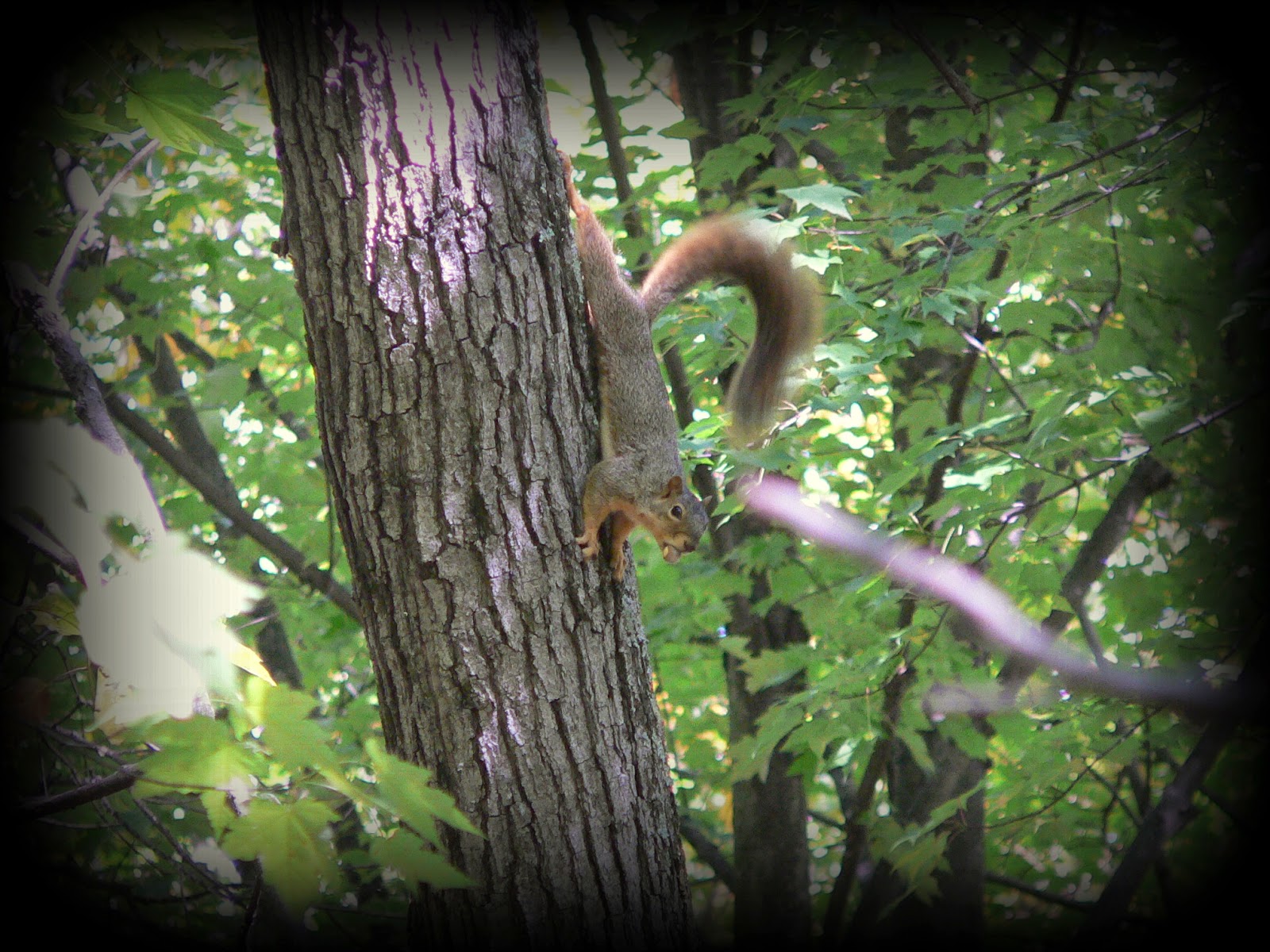 That was the last straw, it was time to make my way back to my car and grab an apple and my hunters orange cape, and start hunting squirrels. In Michigan you need hunters orange to hunt any small game but not to hunt turkeys so to keep me on track I left my cape in the car. As I neared the end of the trail and started to drop off the ridge I spotted some turkeys ahead but, as luck would have it they spotted me and weren’t hanging around. I slowly move further down the trail when I spotted a head of a turkey just off the trail and no other birds that I could see. I pull the cock back on my flintlock and brought the gun up at the same time the bird stood up and stepped to the edge of the trail were it was met with the full blast of number 5 shot. The bird was down and flopping so I ran up and put a foot on his neck to keep him there. 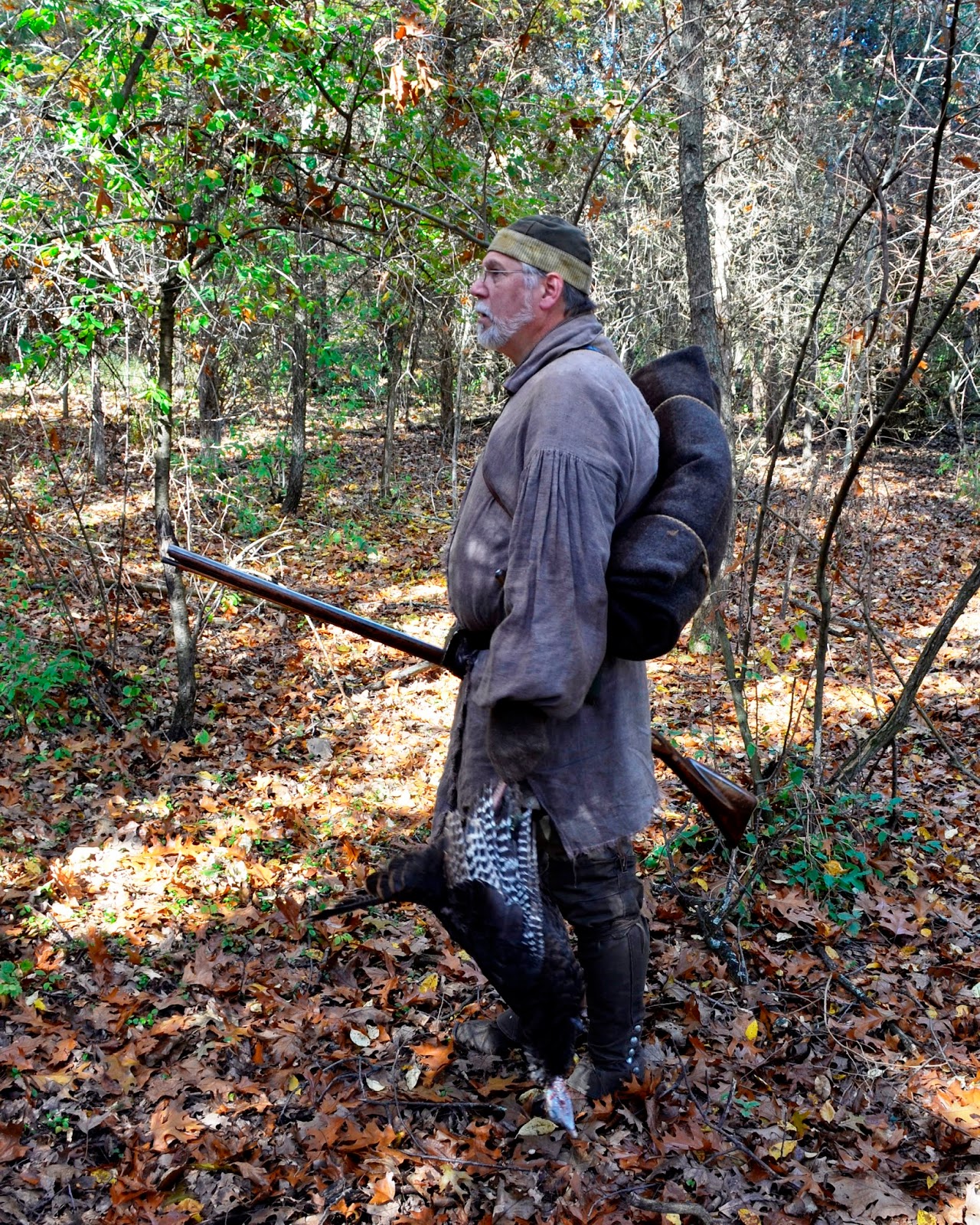 Wow just like that I had taken a bird, it was a young jake and would make fine table fair. 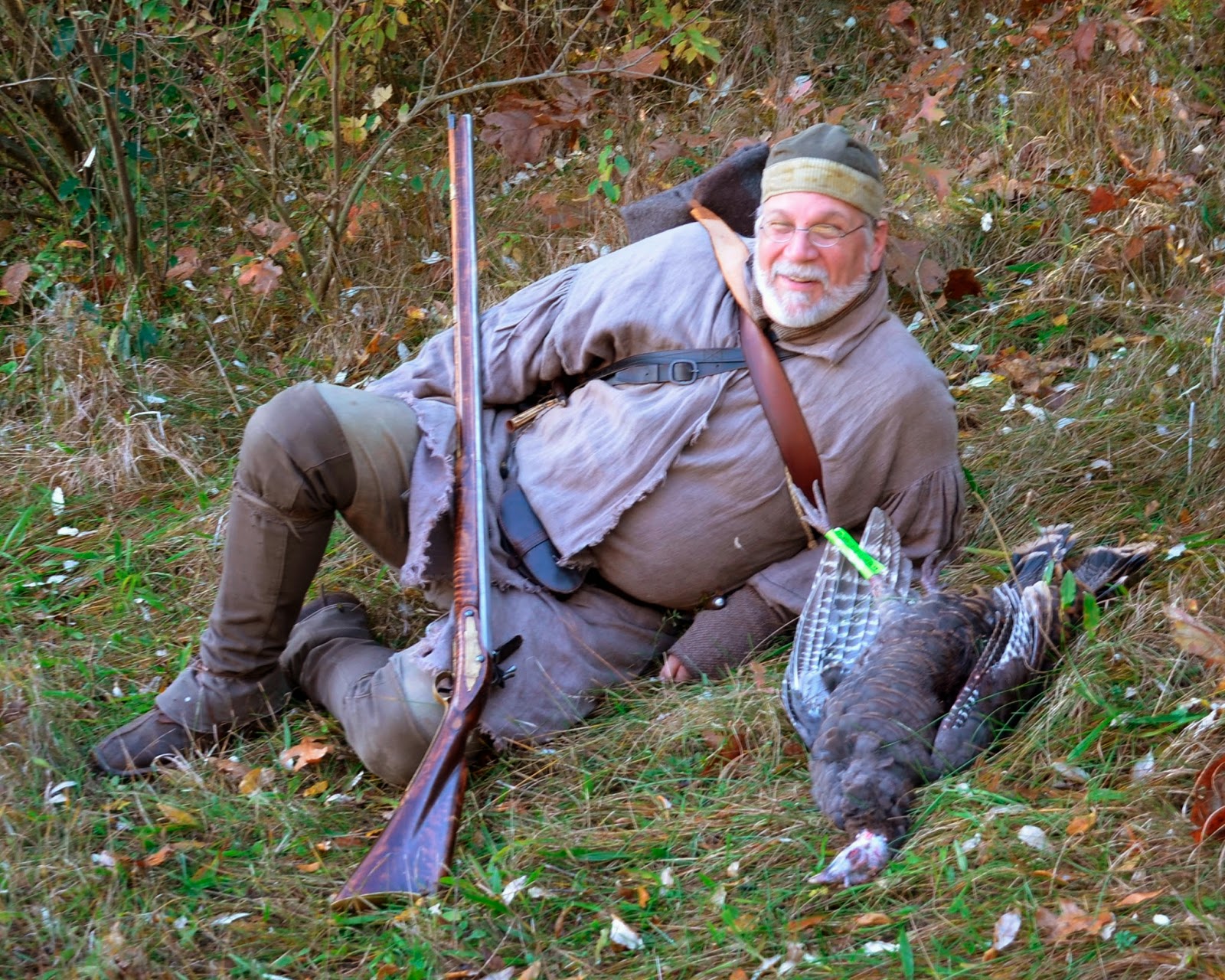 My friend hearing the shot showed up, I think he was just as excited as I was. With a few photos taken we took the bird up to the house to put him on ice and to get some lunch.
We returned to the woods with the intentions of eating our lunch and hunting squirrels for the rest of the afternoon. Well that didn’t happen, instead we sat under a tree enjoying the sunshine, the woods and each others conversation. We talked about hunting, and the hobby we both enjoy and just everyday life and before we knew it the sun had drop down below the tree line and it was time to head out and the squirrels would just have to wait for another day. What a great day in the woods!
Posted by Darrel No comments: 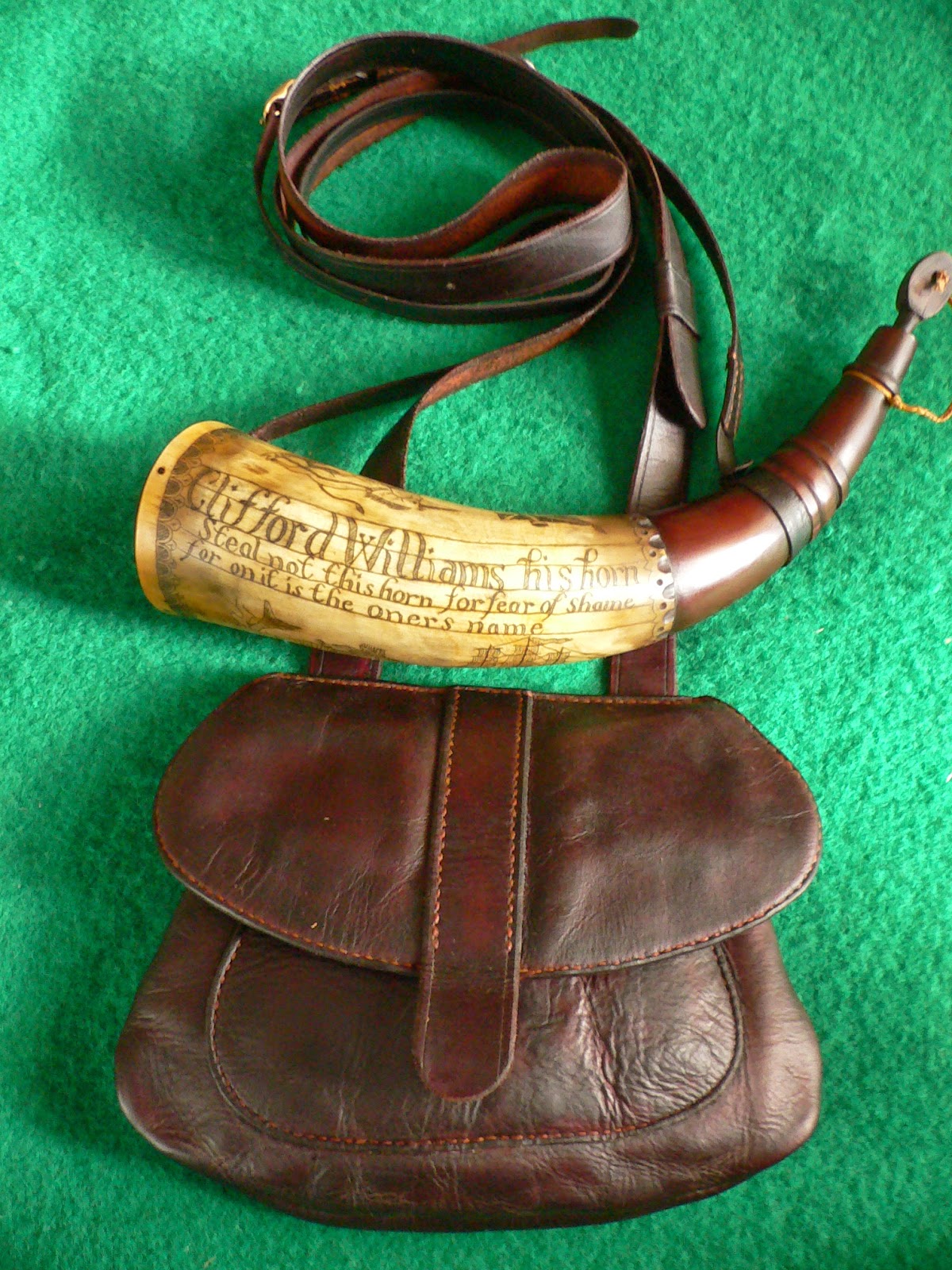 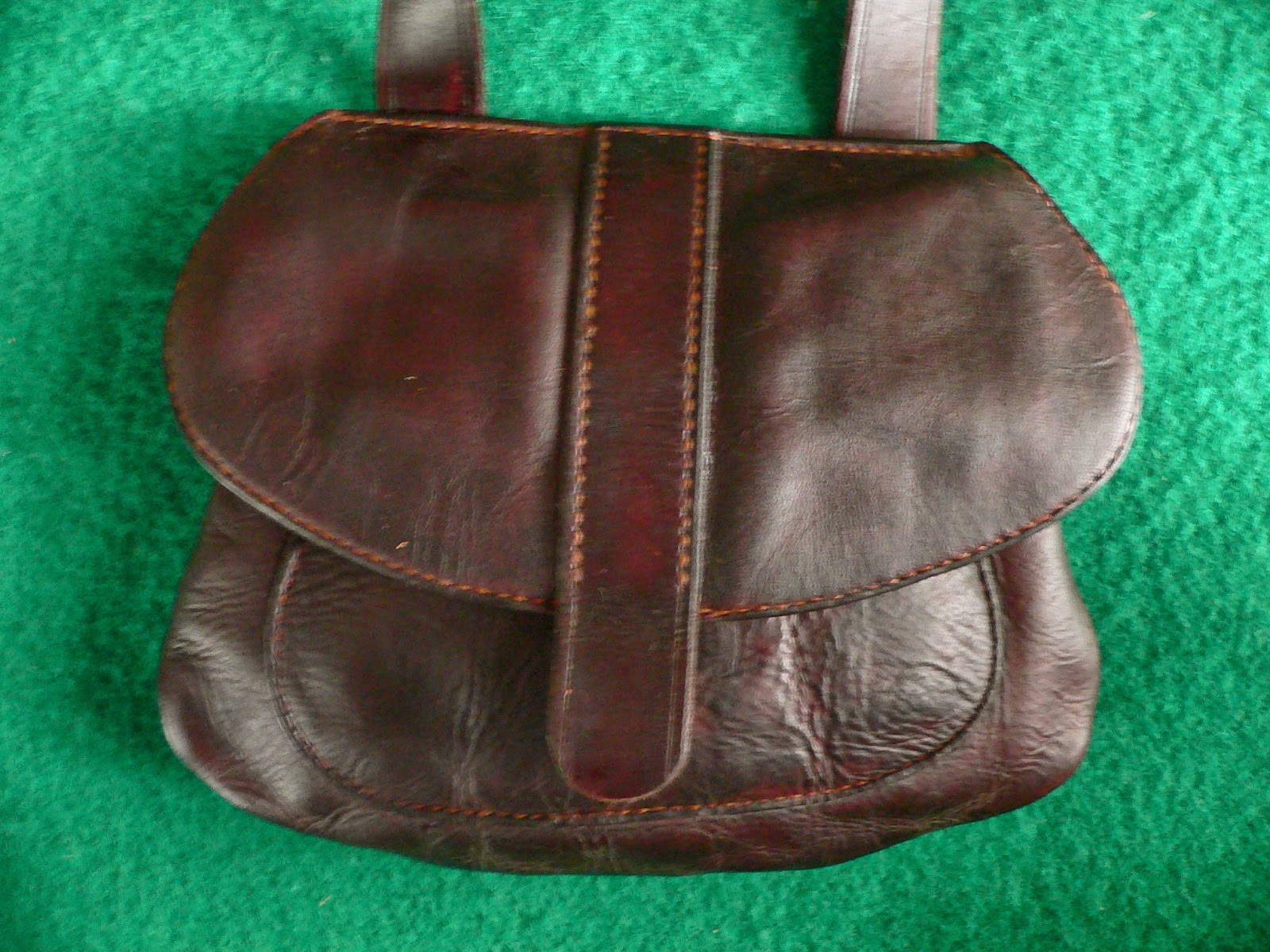 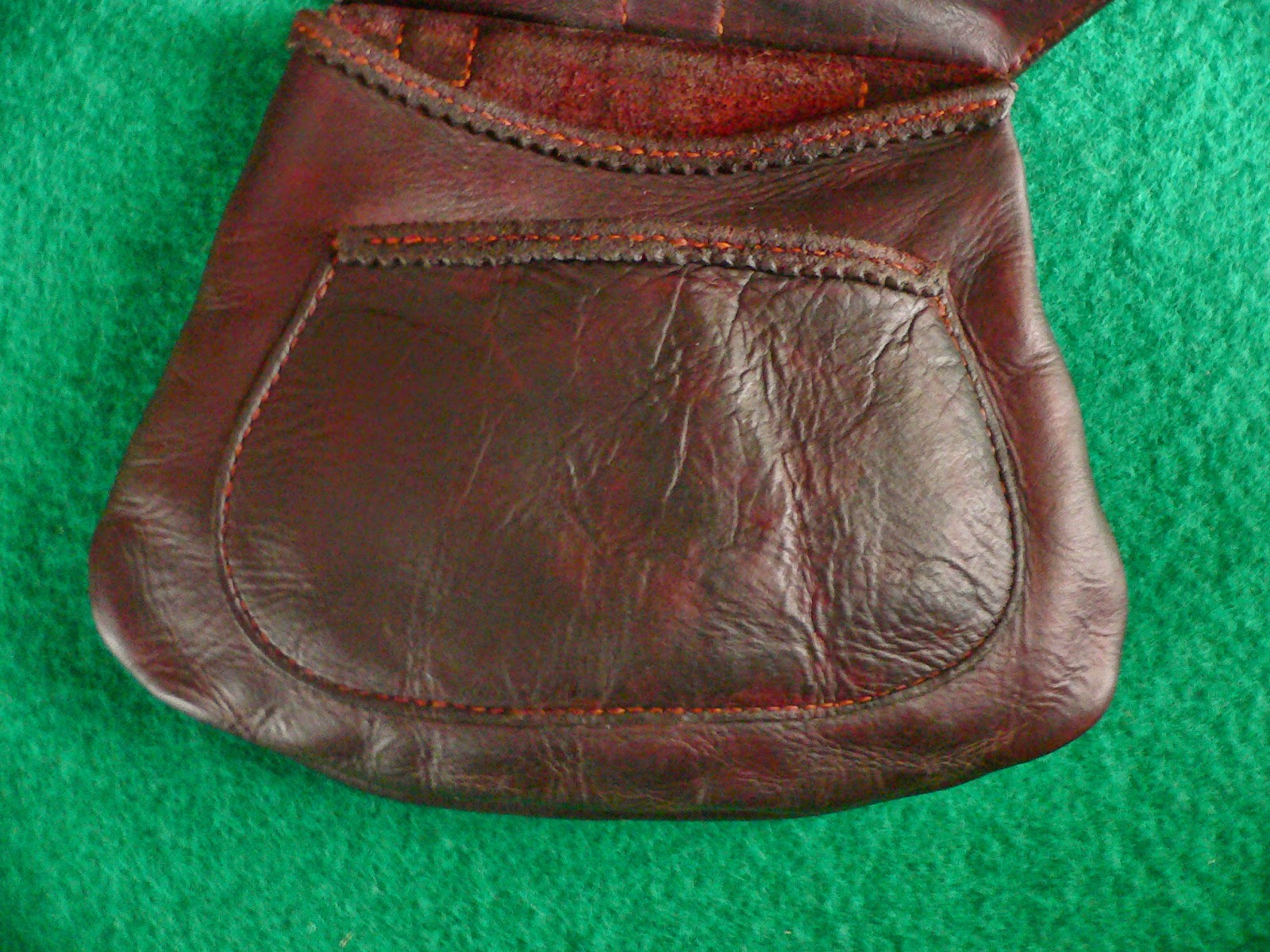 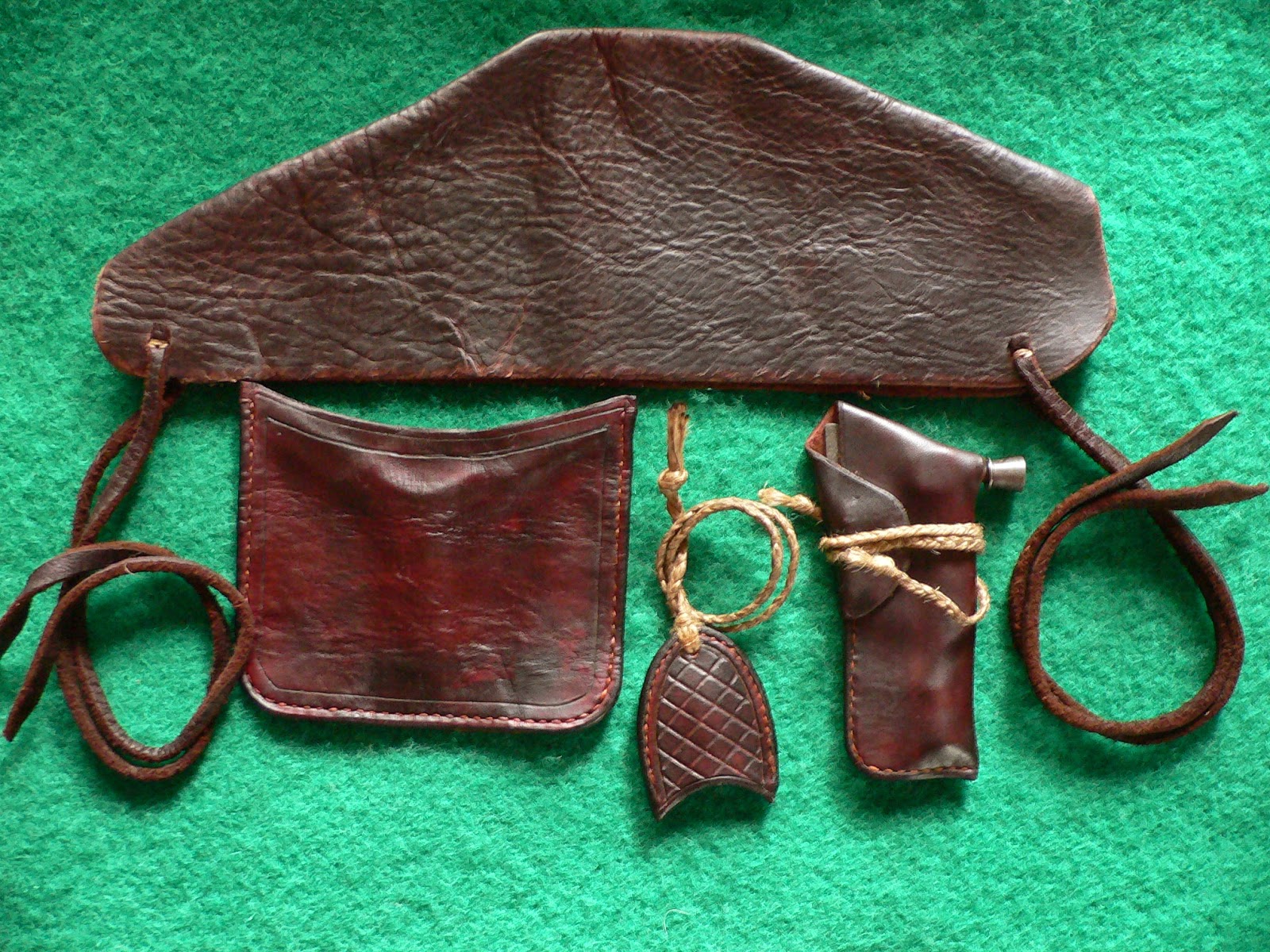 
This is the ax set that I have made up and donated for the upcoming Schoenbrunn Village Trade Fair Raffle. 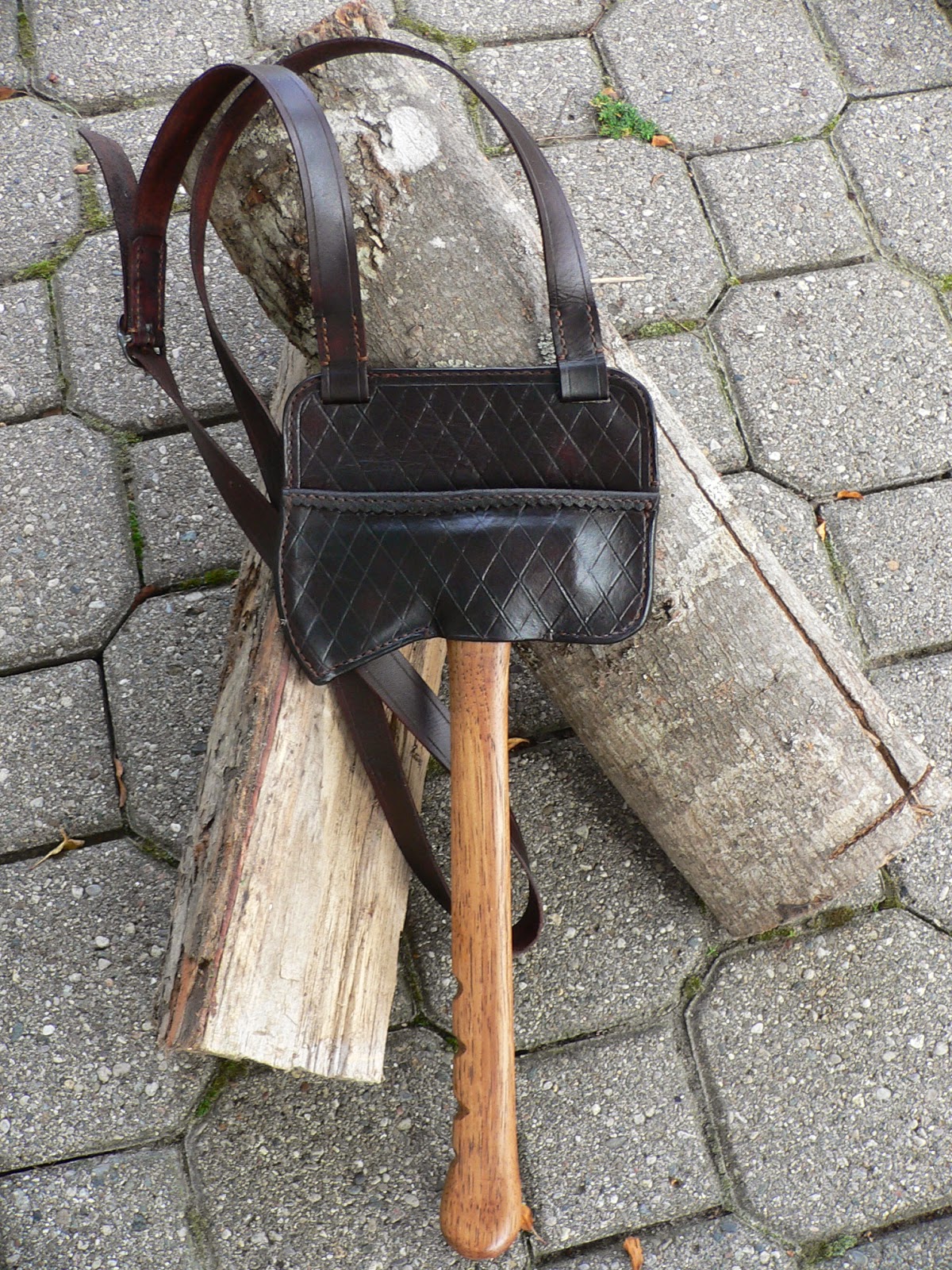 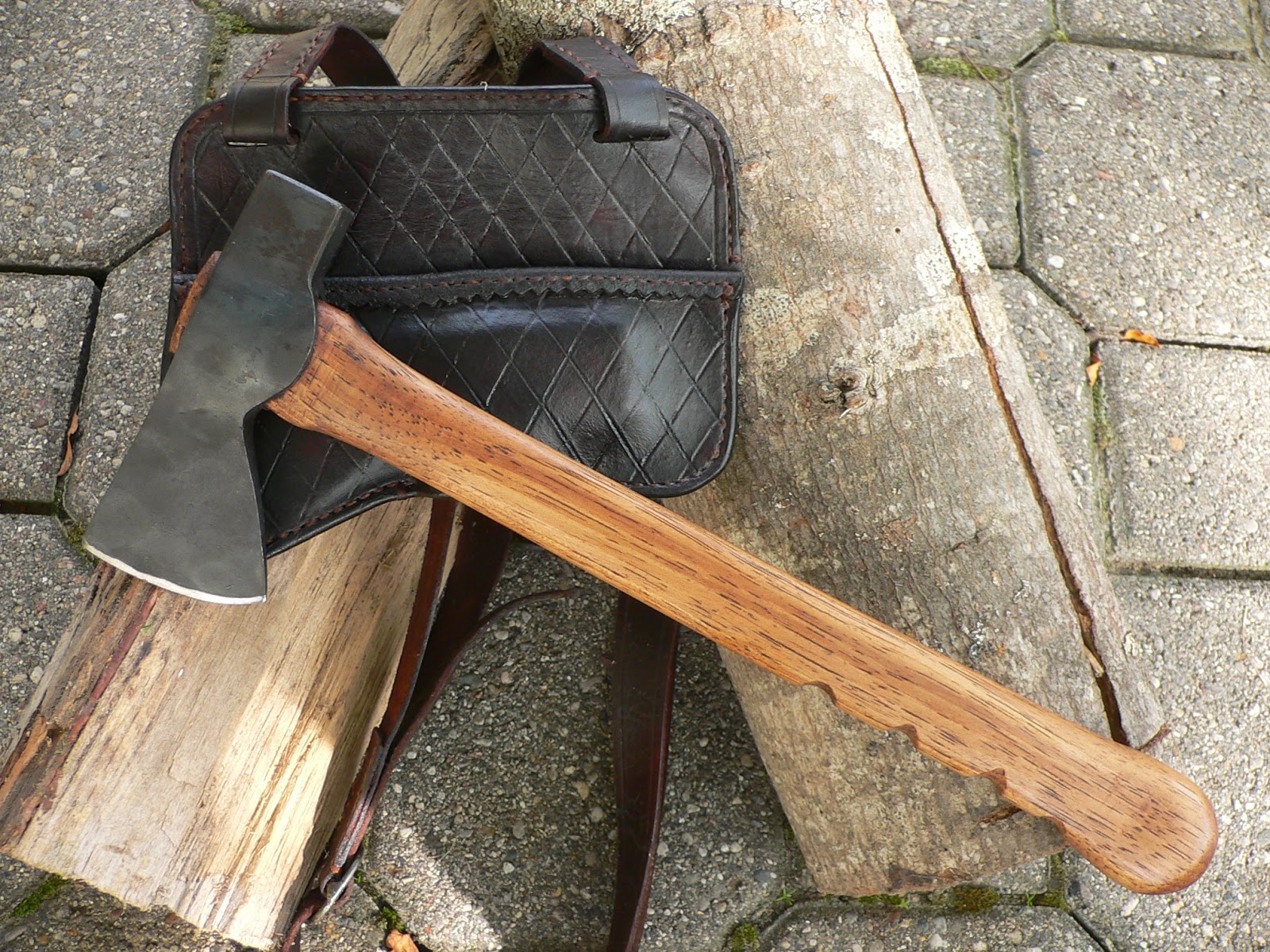 For the past three years they have sold raffle tickets for Ken Netting Fowler and other donated Items.


Ken Netting, New England fowler in 62 caliber, 48" round barrel made by Ken, Jim Chambers flint lock, stocked in walnut with brass engraved furniture. LOP is 13 1/2" weight about 6 1/2 pounds. Stock is relief carved and barrel also has some engraving.  Tickets are for sale, at $5 each or 3 for $10. They can be purchased directly from Jack by sending a check for the amount wanted made out to John Johnson at 1795 Lexview Circle, Mansfield, Ohio 44907. Please supply a self stamped envelope and stubs will be returned to the purchaser. Drawing will be at 3pm on October 19th. Winner need not be present to win.


For more info, Check out their web site at http://www.schoenbrunnvillagefair.org/
Posted by Darrel No comments: