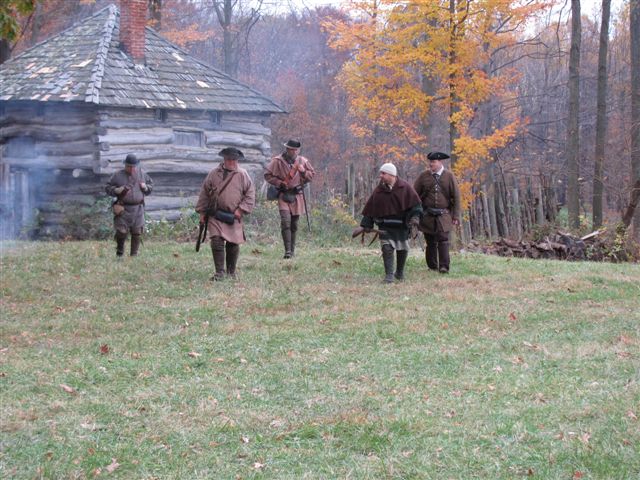 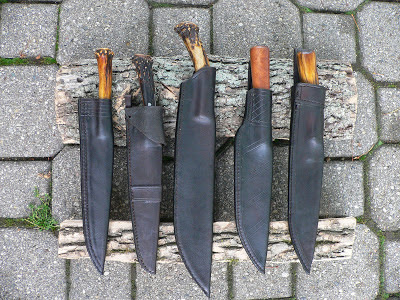 I was sent a box full of knives, made by a variety of makers, some of the touch marks I knew, some I didn't.  I was asked to make up new sheaths for them. 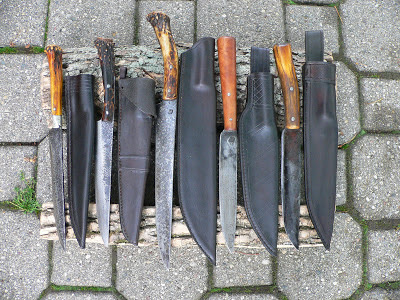 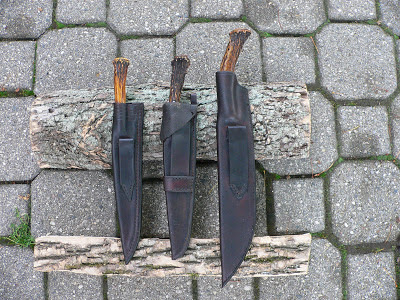 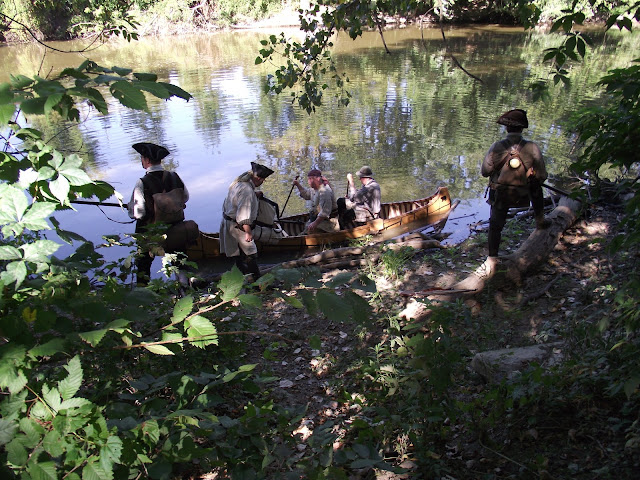 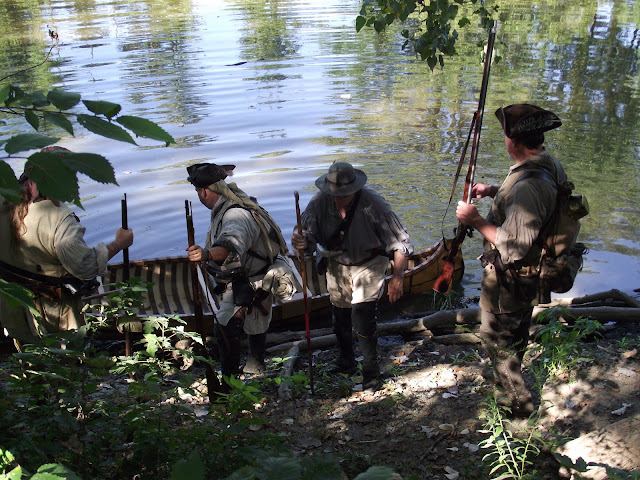 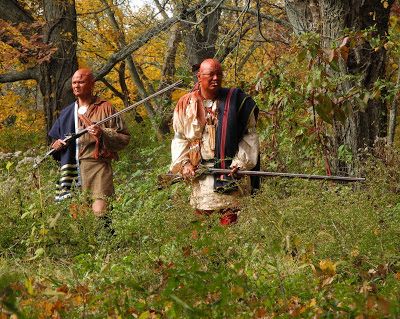 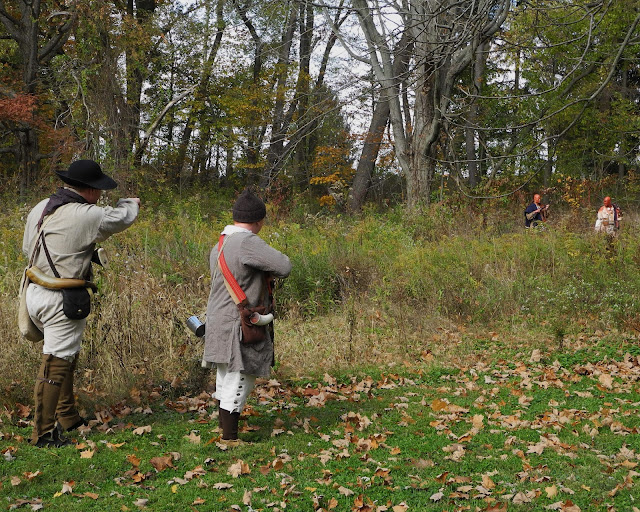 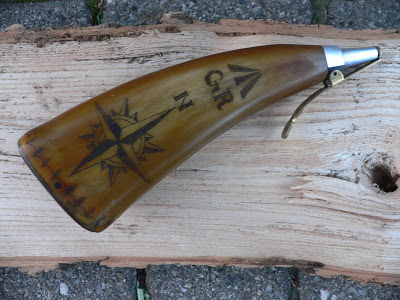 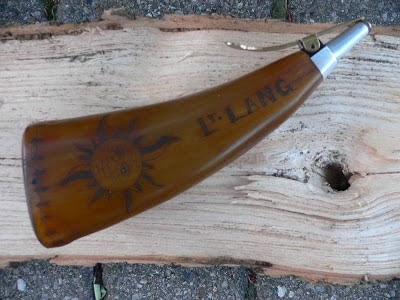 One of our members from Wulff's Rangers is a accomplished Horner, Roy Howman, I had him make up this priming horn for me and as you can see he did a excellent job.He asked what I wanted engraved on the horn and he delivered.
Roy dose excellent work and you can check more of his work on his web site.    http://royhowmanbhw.weebly.com/index.html 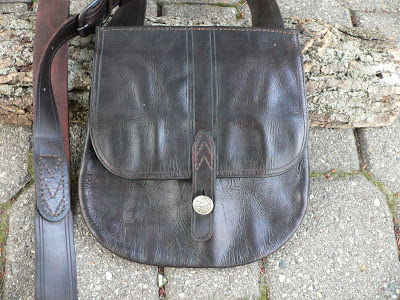 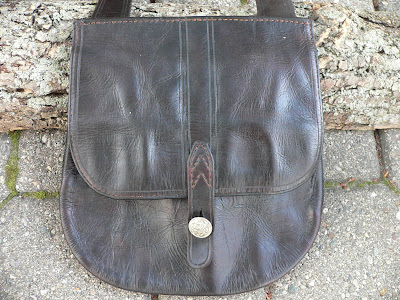 So now that I have a new priming horn I needed a new shot bag. I have been working hard on trying to get caught up on my orders and  decided to take a brake and make up a new bag. So I spent some time on  Sunday and Monday to put this bag together. The bag that I am currently using just wasn't deep enough, so using the same bag pattern I made it a little deeper and half inch wider, (7x8) and changed the style of the flap. I also played around with the strap. I had some left over piece of strapping left from other project, so I ended up with it being 1 1/4" wide and tapering it down to fit a one inch iron buckle. I then spliced in a one inch wide tongue to fit the buckle. It worked out well and I like the look. It's just a simple leather bag 3/4 oz. veg tanned leather, welted seam and hand sewn with waxed linen thread. The flap is made up of two pieces of leather 4 oz. backed with 2 oz. so not to be to thick, the edge is hand stitched then burnished to give it a nice finished look. A small amount of tooling added along with a button closer. 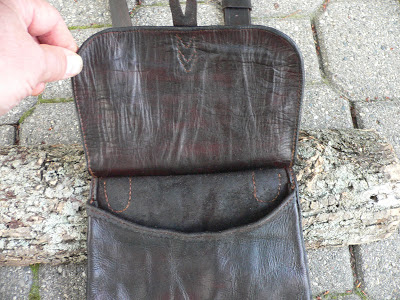 I also added a very small inside pocket to carry my hunting tags in, they are out of sight but not left at home. The new horn will fit nicely in on top of what I carried in my old bag. Now I'm thinking a new powder horn!!! 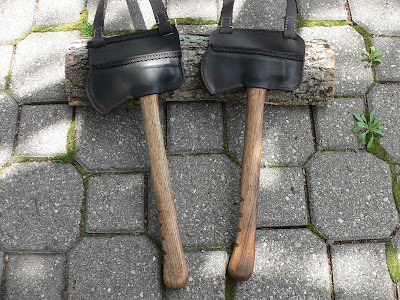 I think I have done at least two dozen of these ax sets. One of these is already sold and the other one will make the trip down to
Martian's Station next weekend along with a few other leather accouterments that I make and will hopefully sell. 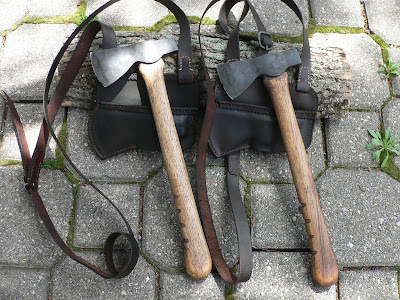 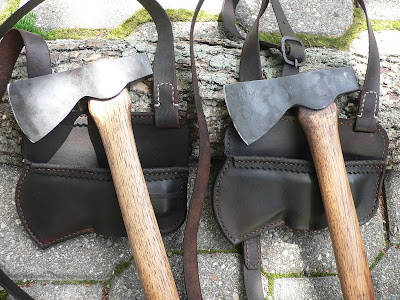