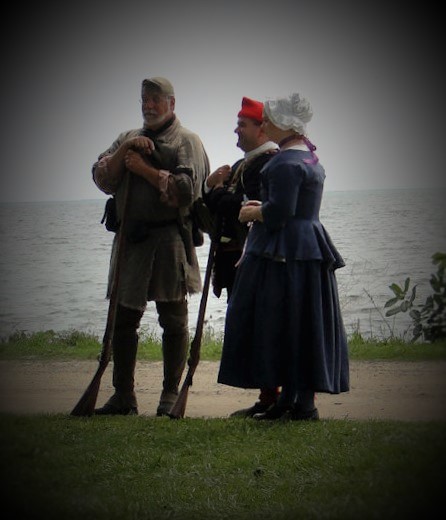 Place: Fort Detroit,  Year: 1762
A British Ranger & French inhabitants along the banks of the river.


Captain Joseph Hopkins arrived in New York in May of 1762 to raise a unit of Rangers,(Queen’s Royal American Rangers). The unit would have 2 lieutenants, 1 ensign, and 100 rangers. The company was formed to be used in Detroit. They arrived in Detroit in the fall of 1762 only to be sent back because Gladwin didn’t have the space nor the supplies to support them through the winter. Hopkins along with 22 of his men stayed while the rest went back to Fort Niagara.

In the spring of 1763 Lt. Cuyler, returned to Detroit only to be ambushed by Pontiac. 19 Rangers were killed 2 wounded and 21 taken prisoner, the rest making to Detroit.
Hopkins rangers were involved in many small fights throughout the summer and also in the battle of Bloody Run. When the fall of 63 approached and Pontiac’s siege fell apart, no longer needed the company was disbanded.
Posted by Darrel