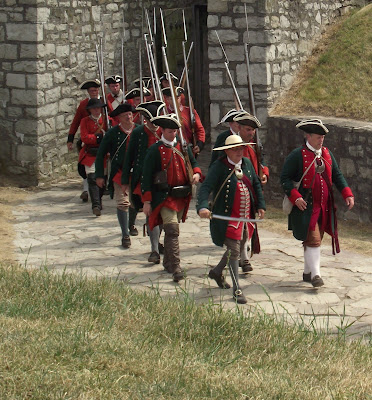 About two o'clock on the morning of the thirty-first of July, the gates were thrown open in silence, and the detachment, two hundred and fifty in number, passed noiselessly out. They filed two deep along the road, while two large bateaux, each bearing a swivel on the bow, rowed up the river abreast of them. Lieutenant Brown led the advance guard of twenty-five men; the center was commanded by Captain Gray, and the rear by Captain Grant. The night was still, close, and sultry, and the men marched in light undress. On their right was the dark and gleaming surface of the river, with a margin of sand intervening, and on their left a succession of Canadian houses, with barns, orchards, and cornfields, from whence the clamorous barking of watch-dogs saluted them as they passed. The inhabitants, roused from sleep, looked from the windows in astonishment and alarm. An old man has told the writer how, when a child, he climbed on the roof of his father's house, to look down on the glimmering bayonets, and how, long after the troops had passed, their heavy and measured tramp sounded from afar, through the still night. Thus the English moved forward to the attack, little thinking that, behind houses and enclosures, 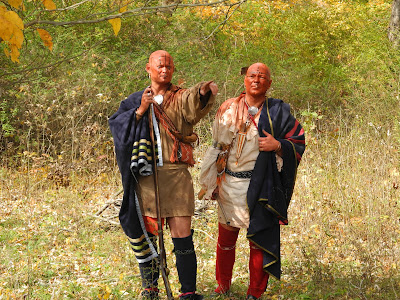 Indian scouts watched every yard of their progress — little suspecting that Pontiac, apprised by the Canadians of their plan, had broken up his camp, and was coming against them with all his warriors, armed and painted for battle.

A mile and a half from the fort, Parent's Creek, ever since that night called Bloody Run, descended through a wild and rough hollow, and entered the Detroit amid a growth of rank grass and sedge. Only a few rods from its mouth, the road crossed it by a narrow wooden bridge, not existing at the present day. Just beyond this bridge, the land rose in abrupt ridges, parallel to the stream. Along their summits were rude entrenchments made by Pontiac to protect his camp, which had formerly occupied the ground immediately beyond. Here, too, were many piles of firewood belonging to the Canadians, besides strong picket fences, enclosing orchards and gardens connected with the neighboring houses. Behind fences, wood-piles, and entrenchments, crouched an unknown number of Indian warriors with leveled guns.

They lay silent as snakes, for now they could hear the distant tramp of the approaching column. 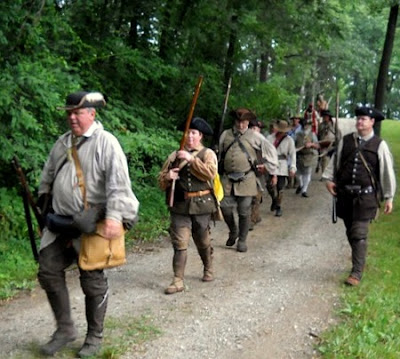 The sky was overcast, and the night exceedingly dark. As the English drew near the dangerous pass, they could discern the oft-mentioned house of Meloche upon a rising ground to the left, while in front the bridge was dimly visible, and the ridges beyond it seemed like a wall of undistinguished blackness. They pushed rapidly forward, not wholly unsuspicious of danger.
Posted by Darrel